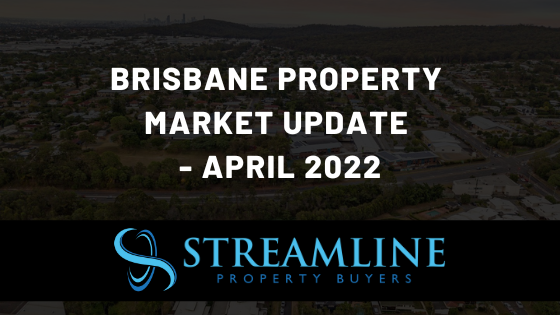 The Brisbane property market has again recorded strong price growth throughout the month of April 2022 according to the CoreLogic Hedonic Home Value Index with dwelling price growth of 1.7%. This is at the same time as the markets in Sydney and Melbourne are on the way down.

The growth across Brisbane was still slightly stronger in the housing sector (+1.7%) compared to the unit sector (+1.4%) but the gap in month-on-month growth between these two product types appears to be decreasing. 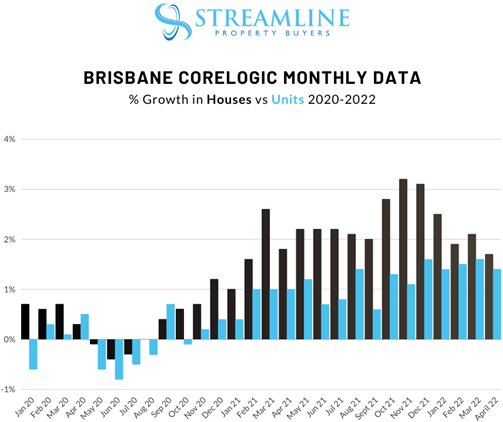 This most recent data, being settled sales data, represents the property transactions where contracts were entered into throughout March. At that time Brisbane had just experienced another city-wide flood event and there was a lot of uncertainty in the market. Therefore, this result is reassuring.

The top end of the market has lost more momentum in terms of price growth, compared to the middle segment and the bottom end of the market throughout Brisbane. This is a trend that is not set in place, given we have observed this pattern for the last 3 consecutive months. The data below from CoreLogic also confirms that all 3 segments of the market have passed their peak rate of growth over a 3 month period.

Brisbane has now experienced month-on-month price growth since August 2020.  The peak rate of growth, on a monthly basis, in the housing sector was achieved in November 2021 when the depth of buyers across the city was peaking.  The median value for a House in Brisbane is currently at a record high being $880,332, which is $23,601 HIGHER than it was just one month ago.

In the Unit market the median value reached a new high again this month. The median Unit price in Brisbane is now $487 967 which is $8,405 HIGHER than last month.

Despite the floods in late February, there have been no pull back in property prices throughout the city. After the 2011 floods, the trend was very different. At that time the macroeconomic conditions were also very different, and it confirms that property values are driven by a variety of interrelated factors that underpin supply and demand.

With the announcement of interest rates on the rise, it will be interesting to see if the demand for Brisbane properties dampens in the future. Over the last 12 months, every suburb in Brisbane has experienced positive house price growth. In the unit sector prices have dropped by less than -1% in some places, but the majority of suburbs have experienced positive price growth in the unit sector as well. The historically low-interest rate environment, together with many other local factors contributing to low supply and high demand, has caused all locations across the city to boom.

The commentary around rising interest rates will cause some fear to penetrate the market. When we put some perspective on what the effect will be, the reality is that not everyone who currently holds a mortgage will be impacted in the same way. The same is true for property buyers.

It is important to remember that unemployment is at the lowest level since the 1970s – currently sitting at 3.95% nationwide. Queensland has added close to 100,000 new jobs over the last 12 months according to the ABS data released in March, so our State has recovered extremely well in this time. It is not unreasonable to assume with unemployment rates so low that we will start to see some upward pressure on wage growth. This will also partially offset interest rate rises in the future.

Investor finance commitments have increased in Queensland to 35% of all lending and nationally this figure sits at 33.3%. This shows a commitment from individuals and institutions to invest in property in a market where rents are on the rise.

With vacancy rates at historical lows in Brisbane, we expect the rents to further increase in the coming months – another sign that any impact from rising interest rates may be cushioned by other things at play in the current market.

Vacancy Rates across the city are now at 0.7% – the lowest level on record since 2005. The table below highlights where vacancy rates across Brisbane sit at the end of March 2022.

Since the floods at the end of February, and also with international borders now open, even the inner-city rental market is tight. There is very little available to rent, regardless of where tenants are looking throughout the city. It is a tough market for tenants to find a home, a problem that will remain for some time yet.

Over the last month, the average auction clearance rates recovered. During the 4 weekends of March, according to Domain, Clearance Rates across Brisbane averaged just 57%, but throughout April they increased to an average of 69%. In general, we are starting to see fewer registered bidders at auctions throughout the city, a sign that the buyer demand has softened. Although the demand has softened, there are still more buyers than sellers which is why prices are still on the rise. We are also seeing Agents and Auctioneers working harder to close the gap between buyers and sellers – a sign that sellers’ expectations have not yet slowed down to align with the buyer activity.

There is no evidence that we have seen of prices softening. Whilst the volume of buyers is a little lower, the quality of those buyers is still evident. This means that we are still seeing strong prices being achieved, especially for quality real estate across the city.

We expect Brisbane to remain a fairly resilient market in many areas amid higher interest rates due to our relative affordability, low levels of supply, and the continuing strong interstate migration flows. A higher volume of people relocating is supporting the demand for residential property and this is not a trend that we expect rising interest rates will change. Total listings remain 21% lower than 12 months ago in Brisbane and more than 40% below the 5-year average according to CoreLogic. Unless we see a huge increase in the number of properties that become available for sale, prices will remain strong in the months ahead.