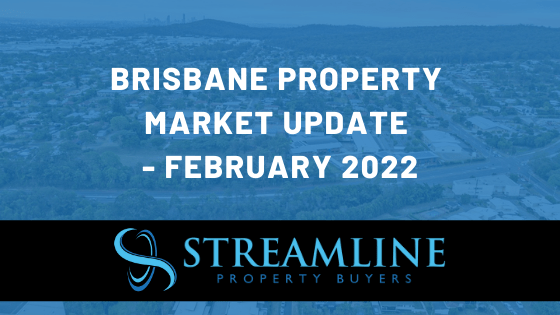 This article will highlight what has happened in the Brisbane Property Market Update in February 2022.

Brisbane residents have become even more resilient over the last month. We have grown to accept the unexpected. No one imagined that we would see another flood event throughout our city, and yet the significant rain event throughout the last few days of February was enough to see this happen. Despite this intense weather event, Brisbane residential property markets remained the fastest-growing capital city market throughout all of Australia throughout the months of February. It has been a whirlwind of a month!

The driving force behind the continued strong growth in Brisbane is low supply and high demand. There has been a lot of discussion around what impact, if any, the recent flood event will have on the market as we look forward to the weeks and months ahead.

With supply already -30.2% below where we were 12 months ago, and more than 40% below the previous five-year average, it is possible that in some areas supply might tighten further. You can see below that total listing volumes in Brisbane are trending lower than any other capital city market in our country. A decline in listings was something that we experienced following the 2011 floods, so we can often draw from experience to determine what we might see again in this instance. 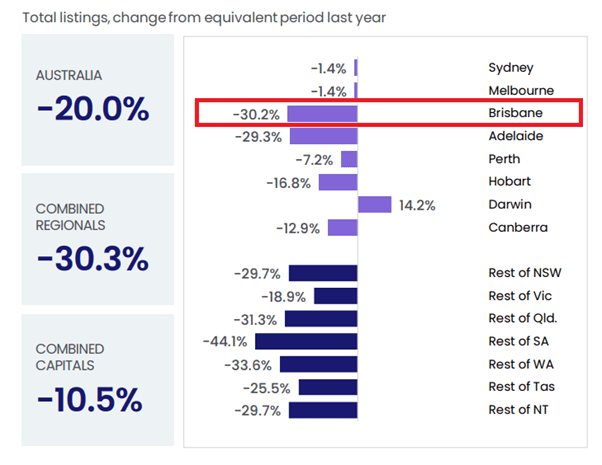 A tight supply market is not something that is uniform across all markets in Australia right now as can be seen in the graph above. Brisbane and Adelaide are the two capital cities with the lowest total supply right now, whereas Sydney and Melbourne have returned to more normal supply levels. This helps to explain why Brisbane has continued to see price growth in recent months at the same time as Sydney and Melbourne property price growth has stalled.

When there is low supply, there is less choice for buyers. It creates more urgency and there is a real fear of missing out.

There are some things that we now have to consider that might impact buyer demand in Brisbane. Some buyers might be concerned about the most recent flood event. Other buyers might be feeling uncertain by the unfolding world events, where there is a degree of global uncertainty unfolding around us.

We do not think that there will be any further immediate impact from Covid-19 now that international borders have reopened, and our country’s vaccination status is high. We also do not think there will be any slow down in interstate migration. Now with international borders open, we are also able to see international migration, which means more people will need somewhere to rent or buy. We are still hosting the Olympic Games in 2032 and we are still building all of the infrastructures that will come as a result of that. We are still one of the most affordable cities to live in within Australia, and our climate and lifestyle remain one of the most sought after in the country. There are still a lot of reasons to believe that the demand for Brisbane property, especially flood-free property, will remain strong through the months ahead.

In this month’s update, we outline the performance of the Brisbane property market across all sectors and provide our insights in terms of the months ahead.

The latest Hedonic Home Value Index data by CoreLogic released on 1st March 2022 for the month of February 2022, has confirmed that the median dwelling value in Brisbane increased by a further +1.8% over the month. This price growth is lower than November, December, and January, which now reflects a slowdown in the rate of growth across the city. The current median value for dwellings across Greater Brisbane is now $722,433 which is $15,893 higher than one month ago.

Annual growth for the last 12 months for Brisbane Dwellings is now +29.7%.

Between last month and now, the growth in the top end of the market slowed because the top 25% of property values across Brisbane was at 9% and it has now dropped to 8.3%. The middle 50% of property values previously saw price growth up to the end of last month of 8.5%, but this has increased slightly to 8.6% this month. The lower segment of the market was previously at 7.2% and is now at 7.3%.  These results indicate that the only segment of the market that has started to slow in terms of price growth is the top end in Brisbane.  This will be something to watch again next month.

The Brisbane Housing Market is still the top-performing Housing Market across all capital city locations throughout Australia. Median values for the greater Brisbane region increased a further 1.9% throughout February 2022. The rate of growth has slowed down for the third month in a row, down from the November 2021 high of 3.2%, followed by 3.1% price growth across December, and 2.5% in January. Despite the slight slowdown in the momentum, this is another new record median value for Brisbane Houses. The 12-month change in Brisbane house prices has been 32.8%, which is the strongest 12-month house price growth across all capital cities as well as the rest of state regions throughout Australia.

The current median value for a house in Greater Brisbane is now $828,175 the highest it has ever been. This is $18,362 MORE than one month ago!  Houses in Brisbane are getting more expensive month-on-month.

The Unit Market in Brisbane grew strongly throughout February 2022, reaching a new record high.  Unit median values in Brisbane were up 1.5% this month, compared to 1.4% last month.  The 12-month growth for units across Brisbane is now +14.4%.   The current median unit price in Brisbane is $468,393 which is $10,244 more than one month ago.

Summary of Price Growth in Brisbane for the Year to Date

The graph below charts the % change in property values for Houses and Units since January 2020 in Greater Brisbane. 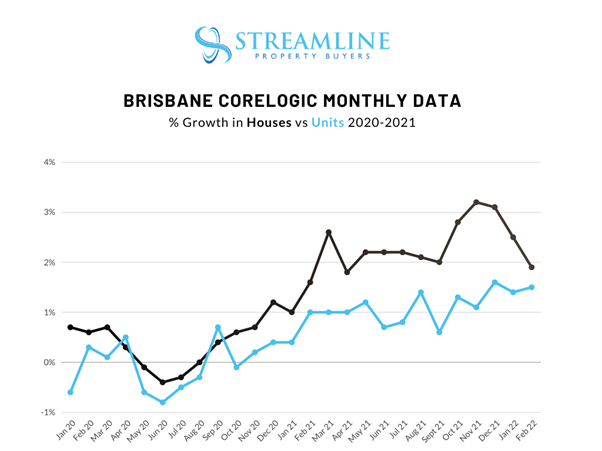 The housing sector (black line) continues to outperform the unit sector in Brisbane on a month-to-month basis, a trend observed since October 2020.  The rate of growth is now slowing in the housing sector.  This means House values are still increasing every month, just at a slightly slower rate. 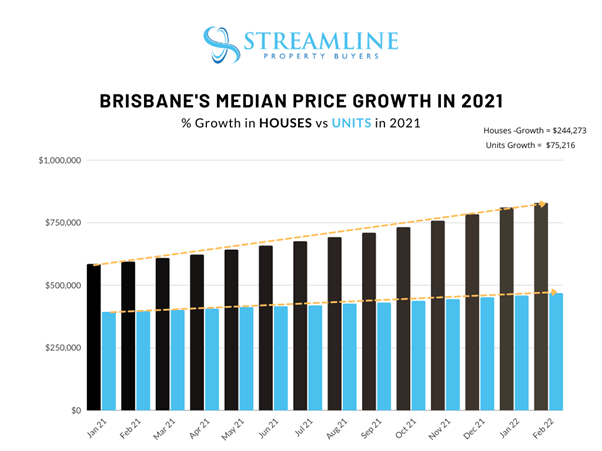 Vacancy remained tightened in every sub-region of Greater Brisbane this month as can be seen in the table above. There was a huge recovery in the Inner City market, with Vacancy Rates now sitting at 3.2% – a level not seen in this sub-region since 2013 prior to the oversupply of inner-city units being constructed. Now with international borders open, and the impacts from the recent floods, we expect Vacancy Rates to tighten further in the months ahead.

Rental incomes in the unit market throughout Brisbane have seen an annual increase of 6.5%. In the last two months, we have seen a slight softening in the rate of rent growth for both houses and units in Brisbane.

Gross rental yields for dwellings across Greater Brisbane according to CoreLogic are 3.6%, unchanged from last month.

What did we see on the ground across Brisbane during February 2022?

Buyer demand has remained strong throughout Brisbane during February. On the ground, we have started to notice slightly less competition in the middle and lower price points. Competition at the top level remains fierce and the depth of buyers competing for quality family homes in blue-chip locations is high.

At the top end of the market, most properties are selling by auction with multiple registered bidders. Properties in the middle and lower end of the market in Brisbane are still being sold with multiple offers across the areas in Brisbane that we service. Even properties that are not listed on the main real estate portals, and that are transacting off-market, are often selling with more than one offer. The market conditions are still in favour of the seller with more than one buyer for every property that becomes available.

We will be able to track next month what happens to those properties that are in low-lying areas that have been impacted by floodwaters in the recent flood event. We don’t expect to see any flood-impacted properties listed for sale in the coming weeks unless a property owner is uninsured and is willing to sell on an “as is” basis.

We expect the number of listings to fall in locations impacted by the recent flood event. This is similar to what occurred after the 2011 floods in Brisbane.  We also predict that the demand for properties in locations impacted by floodwaters in this flood event will also fall. Many buyers were willing to accept the risk after the 2011 floods, not expecting a similar event to unfold again, especially so soon after, but perhaps it will be harder to forget after two floods in 11 years.

In terms of rental demand, we expect this to peak in locations close to the flood-impacted areas of Brisbane as those impacted look to temporarily relocate whilst their homes are repaired. Given the significant strain already on the construction industry, the timeframe for repairs might also be longer than after the 2011 flood event, so we expect this to put upward pressure on rents. Vacancy rates were already so low before this event, so more people looking to rent, even if only temporarily, will put additional price pressure on this segment of the property market.

In terms of demand, it is possible that the buyers who are already in the market will be more focused on non-flood impacted properties and we could possibly see a heightened level of demand for these locations as buyers become more concentrated to higher areas within a suburb. At this stage, it is too early to tell. But we do expect that some buyers might sit out of the market waiting to see what impacts there will be to property values in the months ahead. Events like this can often affect confidence levels in buyers, especially for those who may not know the local areas well or not understand how to conduct all of the necessary due diligence.

We still expect prices to rise in Brisbane in the months ahead- especially for non-flood impacted properties. There is limited inventory, and the demand remains strong enough that the competition is likely to continue to drive prices.

Our trajectory for continued price growth remains unchanged, although the price growth momentum may soften. Market conditions are strong and very different from what they were prior to the 2011 floods in Brisbane. Understandably with the federal election looming, rising global uncertainty, and potential changes in interest rates, there remain some elements that could slow growth or stall growth in the future. But for the moment, 2022 still looks very promising for Brisbane property, despite the events that unfolded over the last week in February.