Would You Buy A House Where Someone Was Murdered? 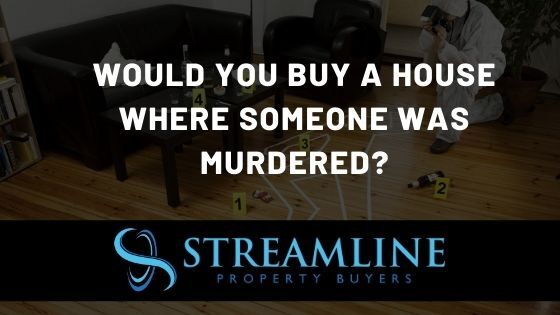 This is a question I recently had to consider, when inspecting a property on behalf of an interstate property investor.

In considering if a buyer would consider a house where someone was murdered, I was faced with some confusion and uncertainty.  Maybe it would be discounted, but there is a high stigma attached.  So what is that worth?

When I arrived at the home I was inspecting for a client, a lovely 4 bedroom, recently renovated family home adjoining parkland in a premium inner-city location, I was confronted with the information that the agent was obliged to disclose. He simply stated … “I need to make you aware that there was a significant incident that occurred in this property in 2015. A little girl was murdered by her father inside.”

Now, this definitely caused me to stop right there, before entering the property, simply to think. I felt like I needed to draw in a few deep breaths. Normally I don’t have an emotional response when inspecting or buying property. Perhaps it was the mother in me, I’m not sure. After all, when looking at a property for others, as a Buyer’s Agent, I have learnt how to keep my emotions out of it.

I had already reviewed the property from my desktop. It ticked a lot of boxes for my Client. But with this new information I had to reconsider if this property was going to suit my buyer. Despite my immediate reservations, I entered the home and continued with the inspection, taking photos and video footage as I normally would.

But something “felt” terribly uncomfortable in that moment. As I walked through the home, thoughts flooded though my head. I was asking myself so many questions …

“Who would want to live here, potentially raise a family here knowing such a horrible crime took place within the home?”

“Who would want to rent this property, when there are so many other properties a family could rent that don’t share this terrible history?”

“Who would actually want to buy this property – a house where someone was murdered?”

But, of course, the logic in me started to see the situation from a different perspective. I understood that the property’s history did not increase anyone else’s chance of being murdered inside. Unlike other issues that can impact a property like flood or bushfire risk, just because a terrible event like this has happened before, it does not mean it will ever happen again. Right?
But the crime has resulted in the property being categorized as a “stigmatized property,” which is a term used to describe homes with an unfortunate history that could affect their market value. Death by murder or suicide, tends to make people uncomfortable. Buyers or Renters looking for a home don’t like to feel uncomfortable and many people are scared away by any stigma that is associated with a property.

Evidence has shown that stigmatized properties nearly always sell for less than they would have sold for without the stigma. And this is exactly what attracts some buyers to go for them.

This was a question I had to consider … “At what discounted price, would it be acceptable to buy the property, understanding the fact that someone, a little girl, had been murdered in this home?”

I thought perhaps there is value in the land itself and I explored the opportunity to demolish the property and rebuild something new. But I soon found that the home was protected from demolition, like many character homes that were built prior to the second world war here in Brisbane. That was simply not an option.

So, for my buyer, it was a definite no. Too much risk that the rental return would also be compromised. The crime was too recent to be forgotten and Google still tells the story when you search the address.

But the truth is, for another buyer, the lower potential resale value may present as an opportunity. To the existing owner (who happens to be an investor as the property was tenanted at the time of the incident) it’s pretty unfair that this recent history is now a factor in the asking price. But human nature is what it is, and as a result there may be the potential to save money up front because of what was undoubtably a tragedy, but may have no impact on the lives of the new buyers.

It is an uncomfortable truth to ponder … you can probably get a discount on a house if someone has been murdered in it.  But would you do it?  Would you buy a house where someone was murdered?  I came to the conclusion that I couldn’t.