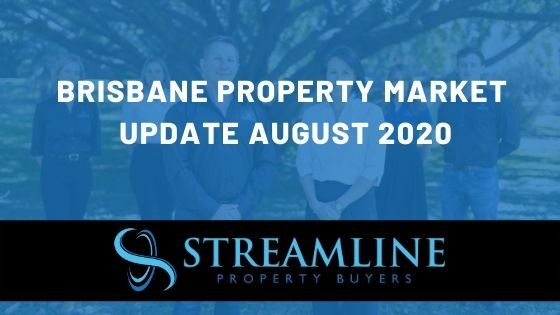 Have you read the Headlines about the Property Market throughout August 2020?

This headline, for example, states that the RBA predicts a potential 40% drop in house prices.  This is a scary headline … but is it true or is it just click bait?  Of course this would be “the most extreme” scenario, but is is the headline that is used to evoke a response.

We know Australia is NOT one property market.

And yet stories like the one above don’t discuss local markets, or the drivers of supply and demand at a local level, at all.

Brisbane is always very different to Sydney and Melbourne, for example.  As a start, our properties are more affordable and our income to debt ratio is a lot lower.  The amount of our take home income that we spend on our mortgages here in Brisbane is also a lot lower.

Additionally, markets around the country are all responding differently as a result of the pandemic.  Let’s explore this in a bit more detail before diving in to why the Brisbane market is proving to be quite resilient.

What markets are most vulnerable to price falls and why?

It has been consistently reported that both Sydney and Melbourne properties are most vulnerable to price falls during the pandemic.

Additionally, with the resurgence of coronavirus cases, especially in Melbourne, and the associated Stage 4 lockdowns, many commentators are again seeing reduced confidence in those locations.

At this stage we have not seen the number of cases in Victoria morph into a broader second wave across Australia and with border closures in place, it is less likely that this will eventuate. 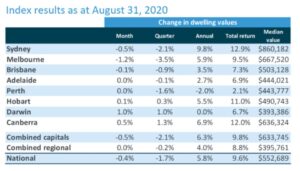 According to the latest Hedonic Home Value Index data by Corelogic, dwelling values in Brisbane saw a -0.1% decline in value over the month of August 2020.  This brings the total decline in dwelling values across Greater Brisbane to -0.9% from the recent market peak.  This is hardly in line with the broader predictions from some commentators over previous months.

The data is starting to show a divergence between regions where the virus curve has steepened, and where the virus is well contained.  Melbourne is the market that has been impacted most with dwelling values falling -3.5% across the last quarter.  Again this is hardly in line with broader predictions of much larger falls, but is does highlight that some areas may be more impacted than others during this time.

In the Brisbane Housing Market, we saw median values for the greater Brisbane region remain stable across the month of August 2020. The current median value for a Brisbane house is now $557,969.

The Unit Market in Brisbane saw a slightly higher median value decline of -0.3% for the month of August 2020. The current unit price in Brisbane is now $387,672.

The Vacancy Rate at the city level is continuing its downward trajectory, after an initial spike from March to April 2020.  Since then rental markets have tightened, with many markets across Greater Brisbane experiencing the tightest vacancy for many years. 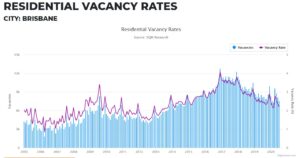 We urge investors to investigate the local vacancy rate of a suburb, and more importantly the trend for vacancy as part of their due diligence before buying.  There remain some “at risk” locations in certain pockets of Brisbane.  For example postcode 4000 (which includes the Brisbane CBD) has a local vacancy rate of 13%, which is extremely high risk for an investor who may be looking at buying into that market.

What are we seeing on the ground across Brisbane?

Our on-the-ground observations continue to suggest that some pockets in Brisbane are outperforming other locations across the City.  When we break down sales we are seeing at a local level, we know there is extremely high demand in some suburbs which is continuing to put upward pressure on prices.

A high number of buyers combined with a lower volume of quality listings tends to have this effect.

Many homes are still being sold with multiple offers.  This is consistent with what we reported last month.

Auctions that we have attended this month have remained strongly contested with multiple bidders in most instances. Below is a photo of one auction we attended where there were more than 100 people (yes we did a head count) and multiple registered bidders fighting it out. 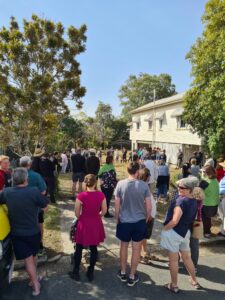 Where we have seen properties passed in (yes this happens as well), we have observed that those properties have been impacted in some way.

Some have needed significant renovations.  One was a development site and another was flood impacted.  In these instances, buyers are more cautious about buying under auction terms and would prefer to do further due diligence before committing to a purchase.

We have also observed instances where the sellers expectations were simply too high and therefore the property did not sell where the market determined its value (even though negotiations post auction).  This happens in any market of course.

In the most recent Herron Todd White Month in Review it states:

“As a general observation, investors have remained relatively inactive in the Brisbane market, but that doesn’t mean South East Queensland isn’t offering excellent potential for those looking to build their portfolio of assets.”

We are seeing inquiry pick up from investors once more, especially those who are seeking opportunities that effectively “pay for themselves” with the more generous rental yields that Brisbane offers.

What about the future – what does that look like?

In a recent announcement, Corelogic’s Head of Research, Tim Lawless, made the following statement:

“So far there has been no evidence that large numbers of distressed properties are coming to the market, however this could change towards the end of the year and into next year as fiscal support tapers and lenders become less lenient on distressed borrowers”

We will address this statement in more detail below.

Whilst the recent announcement of the JobKeepr and JobSeeker extensions may improve some confidence, for some people this is only putting off the so called “economic cliff” that has been referred to a lot.  We remain of the opinion that different markets around Australia will be impacted in different ways.

For a start, Queenslanders are the most optimistic property seekers in the country according to a recent report.  Demand is strong, and has remained strong, throughout the worst of the pandemic.

Additionally, any economic cliff, will be relevant to the level of exposure of each particular market.

According to a recent NAB announcement, Australian Home Loan deferrals are broadly in line with the total portfolio spread.  This means the exposure of some States to potential “forced selling” is much less than some other states.

This provides a greater level of confidence for property owners and property buyers in Brisbane, given our exposure is a lot less than other locations around Australia.

Additionally, the average mortgage size is a lot higher in Sydney and Melbourne, compared to Brisbane and other Capital Cities around the country.  On this basis, we urge people to read into the general data and understand more about local drivers of potential risk.