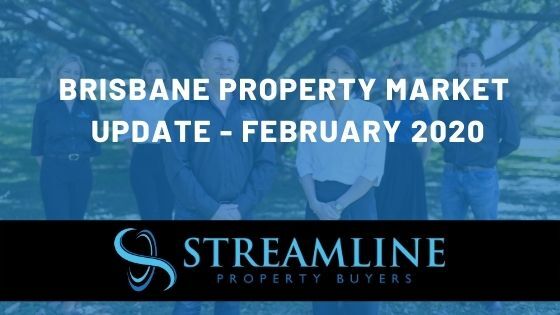 Brisbane continues to show underlying strength in its property market with a new record median house price set in February 2020 of $503,265.  This month’s Brisbane Property Market Update can report another month of positive house price growth.  February demonstrated an increase in property values of 0.6% according to the Corelogic Hedonic Home Value Index across all areas of Greater Brisbane which is in line with the national trend for positive property price growth since June last year.  Of course several pockets within Brisbane are performing a lot better than others as we have explained in previous monthly updates.

Further support from the Valuer-General’s 2020 Property Market Movement Report showed that the residential median land value increased slightly in Brisbane from $455,000 to $460,000 over the last 12 months.

Brisbane’s upper quartile values are 2.2% higher over the last 12 months compared with the lower quartile, up just 1.3% so the trend shows stronger performance across premium markets.  This may be attributed to the dominance of owner occupiers during the last 12 months (rather than investors) and the geographical spread of properties included in the data whereby properties closer to Brisbane’s CBD in the higher price brackets are performing better than other properties much further out.

From a rental perspective, during February, gross rental yields compressed slightly from 4.6% to 4.5% in Brisbane according to Corelogic Data  This can possibly be attributed to house values rising slightly more rapidly than rental rates, but it may also be due to seasonal factors so we will be monitoring this in the coming months.

Keep in mind mortgage rates are also trending lower, with another rate cut announced on 3rd March 2020.  From our review some three year fixed rate loans now being offered for an investor for as low as 3.14%, so depending on an investor’s deposit amount and mortgage structure there are still a lot of neutrally geared or positively geared property investment opportunities in Brisbane.

Looking ahead, there are a few things we are monitoring to determine the potential future impact on property values in Brisbane.  Broadly speaking, the primary factors supporting the steady price growth in Brisbane remain in place.  These include the low cost of debt and improved borrowing capacity.  Additionally, Brisbane remains affordable with a median house price $369,669 cheaper than in Sydney and $185,823 cheaper than in Melbourne so affordability pressures are less likely in our City.  Furthermore, population growth is still 2.3% greater than the decade average, economic growth is up 21.2% above the ‘normal’ decade average level of output, jobs growth is trending higher and unemployment is reducing with the lowest trend jobless rate in 10 months according to the CommSec State of the States economic performance report (January 2020) .

Of course we can’t predict with certainty right now what impact the Coronovirus may have on property values, if any. There certainly may be supply chain issues for the construction industry, slowing down the delivery of an already lacklustre level of new housing supply due to falling construction commencements over the last 12 months.  Foreign Investment has already plunged by 58% year on year in the 2017/18 fiscal year to the lowest level in a decade so foreign buyers have already existed the market in years prior.  Perhaps there may be some impact to properties associated with tourism, (eg – hotels and motels) and also student accommodation, again it is too early to tell.  Of course we can’t estimate the impact that it may have on consumer confidence or economic growth, but looking back on the SARS outbreak in 2003, there was a sharp slowing of output growth in China for a few months, before a sharp bounce back as the outbreak was controlled and economic stimulus measures were introduced.

So whilst we are entering a period where some may see uncertainty, Brisbane is still poised to report robust growth based on the fundamentals outlined above.  With continued signs of strength across many locations in Brisbane is it a great time to secure your next home or investment property in Brisbane. We look forward to discovering what next month’s Brisbane Property Market Update will uncover.