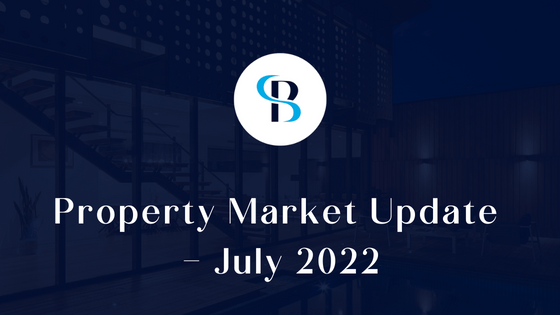 There have been some big changes this month throughout Brisbane, and we are now seeing a split market whereby the median value for houses has retracted, whilst at the same time, the median value for units and townhouses has continued to grow. Whilst there are still a number of buyers in the market throughout the city, a large portion of the buyers appear to be fearful and are taking a stance to sit on the sidelines and observe the market activity, rather than participate in active bidding on properties. Other buyers are gearing up to take advantage of any opportunities that the current conditions might present.

When combined, the median trend in Dwelling Values over the month of July showed a decline of – 0.8% across Greater Brisbane. This retraction is not as great as the fall in median values in Sydney being – 2.2%, Melbourne – 1.5%, Hobart – 1.5%, and Canberra – 1.1%.  Other capital cities including Adelaide, Perth, and Darwin showed small growth rates in median values across the same period. It is clear, that the slowdown in property price growth throughout Australia coincided with the onset of the first interest rate hike in May and the resultant change in consumer sentiment has been very obvious.

With consumer sentiment being pushed to new lows in July it is apparent that both the rate and the pace of the deterioration are comparable to previous major shocks such as the Global Financial Crisis and the onset of the Covid-19 Pandemic.   Respondents who were part of the most recent Westpac consumer sentiment survey identified inflationary pressure, interest rates, the domestic economy and international conditions as the major concerns at this time.

The rate of change in median value trends over the last couple of months has been evident more so in the housing market, compared to the unit/townhouse market in Brisbane. Median values for Houses across Greater Brisbane have declined -1.1% in July.  The current median value for Houses is $884,336 which is $7,797 LESS than last month.

We have observed the shift in demand over recent months away from housing and towards quality townhouses and units. Perhaps this has been stimulated by affordability constraints due to the rapid growth in Brisbane House prices over the last 18 months.  A $500K budget used to be sufficient for a reasonable house on its own lot within 30km from the Brisbane CBD, but now that budget typically needs to be a lot higher.

Instead of shifting further and further away from the CBD to buy a house with a similar budget, buyers have been choosing to compromise on the type of property that they buy and look for townhouse or unit options much closer to the inner-city locations.

This shift in demand is a trend that is also observed throughout the data. From April this year, the unit market has outperformed the housing market in terms of monthly median price growth in Brisbane.  This month, despite negative house price growth for the first month in 2 years, the unit segment of the market continued to see value growth. 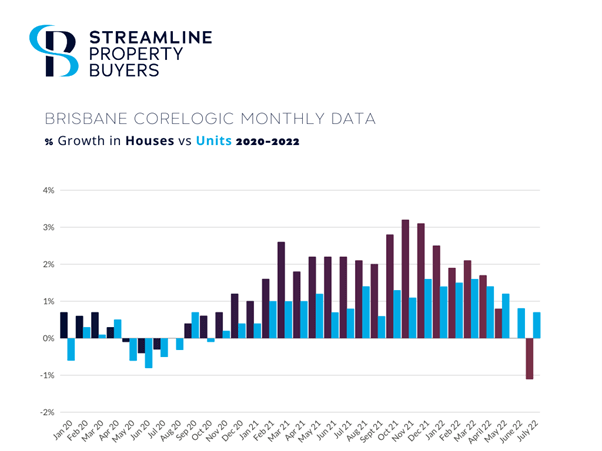 Whilst the majority of markets around Australia are now shifting into a different stage of the property cycle, Brisbane retains a lot of favourable advantages over the major cities of Sydney and Melbourne in terms of the future outlook. 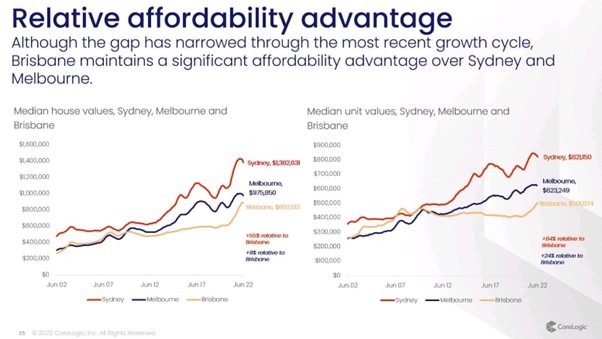 Additionally, with rents on the rise due to record low Vacancy rates throughout the city, Brisbane is already leading the growth for capital city housing rents, with more upward pressure likely in the months ahead. CoreLogic data shows the annual change in House Rents in Brisbane is 13.6% and the annual change in unit rents is 9.7%.  We have observed rents in some areas jump more than 20% in the last 12 months alone and there is no slowdown in sight. This is also having a positive effect on yields with gross yields in Brisbane now 3.4% for Houses and 4.7% for units. 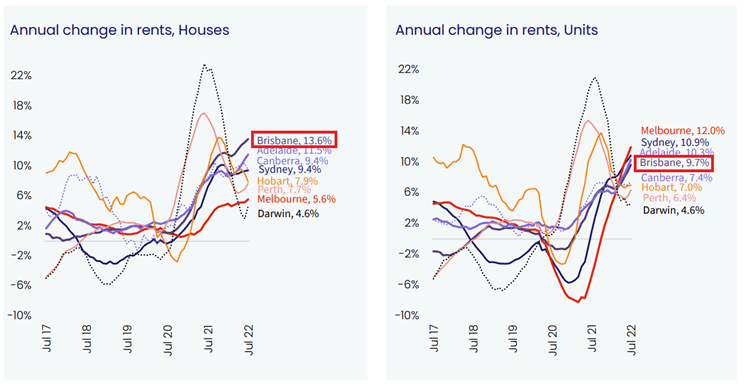 The City-Wide vacancy rate in Brisbane according to SQM Research is currently at 0.6%.  The Table below shows Vacancy Rates for each region of Greater Brisbane.

Even in locations where the vacancy has been elevated for many years in Brisbane due to the oversupply of higher density unit developments, we have seen rapid recovery and take up of occupancy by tenants.  With the number of international visas currently being processed, it is expected that the rate of international migration will rapidly escalate in the summer months – adding more pressure to the rental market in Brisbane.  Additionally, with the rate of interstate migration still elevated, the rental supply issue appears to be a concern moving forward.

We are now also contending with the Queensland Government’s new Land tax changes whereby property investors who have landholdings in the same name outside of Queensland will be slumped with higher rates of land tax from June 30, 2023.  This is yet another disincentive for private investors, who are the main supply driver of rental accommodation for tenants. Legislative changes like this could have further long-term impacts on the supply of rental accommodation which will ultimately result in escalating costs for tenants in the medium to long term.

Supply is also suppressed in the sales market in Brisbane. The total number of properties available for sale is still well below the long-term average in Brisbane, whereas in Sydney and Melbourne the opposite is now true.  Total Listing Volumes in those cities is now back to or above the long-term trend. 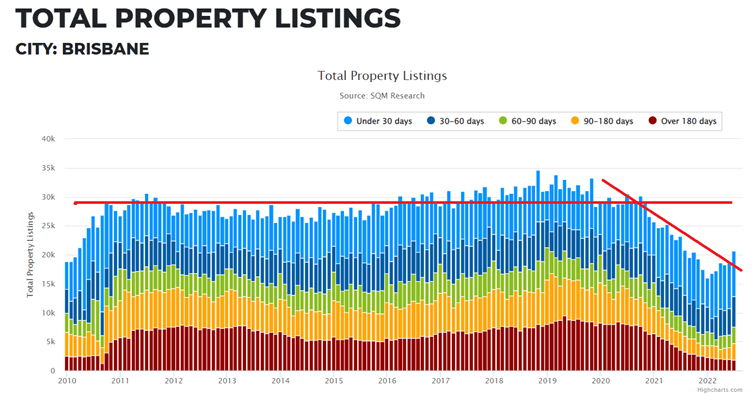 With rising interest rates, we are now seeing buyers lose some of their borrowing capacity.  This combined with inflationary pressure is eroding buying confidence.  Those with pre-approvals are having to determine with each monthly rate increase if those preapprovals are in fact still valid.  Despite rising interest costs, we are seeing no real evidence of forced selling in Brisbane.

With such a strong labour force, we do not expect to see forced selling in the immediate future. Over the last 12 months, Queensland led the way with a solid +4.6% increase in the number of employed persons and the unemployment rate has now plummeted to just 3.5%, which is the lowest figure since the monthly data series began in 1974.  This provides reassurance in the fact that everyone who wants a job, can get a job in the current environment.

As the Brisbane market transitions, we expect to see some good buying opportunities for those who prefer to maintain a long-term focus.  Where there is motivation to sell, we are seeing vendors meet the market – wherever that level might be.  For those who have no urgency to sell, we are seeing days on the market trend higher as the standoff between buyers and sellers unfolds.

The months ahead will be an interesting ride. But the fundamentals for Brisbane are still strong so we expect buyers to jump back in as soon as sentiment becomes more positive.